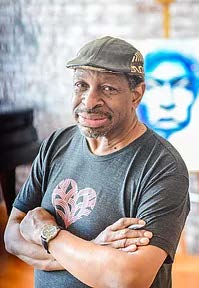 James Gayles is an Emmy Award-winning artist and musician known for his amazing watercolor portraits.  Born and raised in Newark, New Jersey, Gayles attended Pratt Institute in New York, where he studied under renowned painters Jacob Lawrence and super realist Audrey Flack. He simultaneously pursued careers in both fine and commercial art. As a commercial artist, he established himself in New York as a graphic designer and illustrator, becoming Assistant Director of Graphics at NewsCenter 4, NBC-TV. For his work at NBC, he won a television Emmy Award for design and illustration. James is also a two-time winner of Art Direction magazine’s Creativity Award, one for the NewsCenter 4 logo redesign, and the other for an editorial illustration for the New York Times.

In 1980 James relocated to Oakland, California and started working at the Bay Area News Group. He won first place for illustration at the California Newspaper Publishers Award. He has illustrated for McGraw-Hill, Random House, Essence magazine, Black Enterprise magazine, as well as several advertising agencies on both the East and West Coasts.

As a fine artist, James’ paintings have been exhibited in galleries in the Bay Area, throughout the U.S., and abroad. He has won public art commissions from the City of Oakland, the City of Richmond, and the Alameda County Arts Commission. James was a three-time recipient of the City of Oakland Individual Artist Grant and has been selected twice to show at the biennial California Watercolor Competition and Exhibition at the Triton Museum in Santa Clara. He also participated in a cultural exchange with the Oakland-Fukuoka Sister City Association to exhibit and produce public art in Fukuoka, Japan. Most recently, he designed a mural for Oakland SuWWper Heroes Mural Project in West Oakland and was honored to be one of the four artists portrayed and David Burke’s Love Letter to Oakland mural on 4th and Oak Street.

James Gayles is committed to cultivating artists and sharing his work. His vision is to put beautiful, uplifting, and enlightening work out there in the world. He sees art as a vehicle to educate, by portraying ancestral icons who Youth and all people can be proud of.